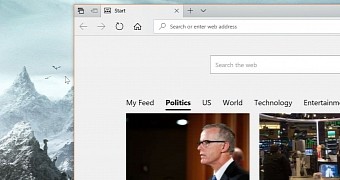 Microsoft is about to make another highly-controversial change in Windows 10, and without a doubt, many users won’t be happy with it.

The company is thinking of forcing users to open links in the Mail app in Microsoft Edge exclusively starting with the Redstone 5 update.

A change included in the latest Windows 10 Redstone 5 preview build reveals that clicking links in the Mail app will launch Edge instead of whatever browser you are using as default. Even if Google Chrome or Mozilla Firefox is installed and used as your daily driver, this new behavior makes Windows 10 ignore your settings and use Edge exclusively.

Microsoft says users can only benefit from this change because Edge is the most secure and battery-friendly browser currently on the market.

“For Windows Insiders in the Skip Ahead ring, we will begin testing a change where links clicked on within the Windows Mail app will open in Microsoft Edge, which provides the best, most secure and consistent experience on Windows 10 and across your devices,” the firm explains.

“With built-in features for reading, note-taking, Cortana integration, and easy access to services such as SharePoint and OneDrive, Microsoft Edge enables you to be more productive, organized and creative without sacrificing your battery life or security.”

On the good side, Microsoft says it’s looking for feedback from Windows insiders, so no decision has been made just yet. For those of you who are already using Edge as the default browser, this change won’t have any impact.

Statistics, however, show that Edge is being used as the main browser only on a small number of PCs. Google Chrome leads in terms of global share with more than 60 percent, while Edge is far behind with some 5 percent.

Redstone 5 is projected to launch in the fall, so Microsoft still has enough time to abandon what’s very likely to become a very criticized strategy.