Windows Still King of the Desktop 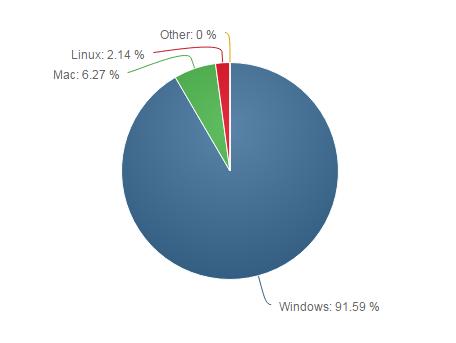 Linux has become a more powerful alternative to Windows, there’s no doubt about that, but this still doesn’t necessarily mean Microsoft is anywhere close to losing the number one position on the desktop.

And statistics provided by NetMarketShare for the month of March 2017 show that Windows not only that is the leading choice for desktop computers across the world but it also maintains a level that gives Microsoft absolutely no reason to worry that anything could change soon in this regard.

Specifically, Windows is the number one operating system on the desktop with no less than 91.59 percent, while Mac is the runner-up with 6.27 percent. Linux is only third right now with 2.14 percent, so before overtaking Windows, it first needs to win again Apple’s operating system.

No rival on the desktop

Adoption of Windows, on the other hand, seems to remain steady, and even though its market share dropped below 90 percent for the first time in many years in 2016, Microsoft’s flagship product is back to growth and managed to recover to 91 percent in December 2016.

Around Christmas, Windows improved from 90.95 percent market share to 91.41 percent, only to continue its growth in February to 91.76 percent.

Last month’s figures thus represent a slight decline for Windows and a small growth for Linux, which manages to grow from 2.05 percent to 2.14 percent. And yet, Linux is currently below the market share it held in July 2016, when it was running on 2.33 percent of the desktop computers out there.

It goes without saying that Microsoft remains the king of the desktop, but we live in a world where this particular market is losing focus, and Redmond is actually losing in those sectors where everyone seems to go, including mobile.

Microsoft failed to make Windows phones successful products, so the company is now trying to conquer Android and iOS by making its services available on these platforms, though without investing in its own platform the whole thing becomes substantially more difficult.

Source: Linux Who? Windows Still King of the Desktop