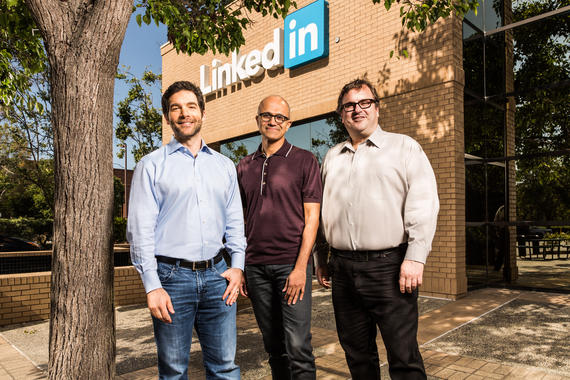 LinkedIn just got one heck of a professional endorsement.

The networking site for white-collar workers will be acquired by technology titan Microsoft for $26.2 billion in an all-cash deal, the companies said Monday.

LinkedIn Chief Executive Jeff Weiner will continue at the helm of the company but will report to Microsoft CEO Satya Nadella, according to a joint statement. LinkedIn will keep its “distinct brand, culture and independence,” the companies said.

Over the past year, LinkedIn has been striving — and struggling — to grow beyond its roots as a resume-on-the-web service and become more of a daily hub for professionals, much as Facebook has become more than simply a site for sharing family photos. Steps in that direction include last year’s $1.5 billion acquisition of online training site Lynda.com and a thorough upgrade of its mobile app.

The 13-year-old service has 433 million users worldwide. It’s free to use, but charges for features such as advanced search and the ability to send messages to strangers.

“This relationship with Microsoft, and the combination of their cloud and LinkedIn’s network, now gives us a chance to…change the way the world works,” Weiner said in a statement.

The acquisition of Mountain View, California-based LinkedIn would be Microsoft’s biggest ever, exceeding the $8.5 billion it paid for video-calling company Skype in 2011. For Microsoft, which is based in Redmond, Washington, the LinkedIn deal furthers its plan to become an essential provider to businesses of cloud-based services, including its Office 365.