Until today, Firefox for iOS was available as a public preview, and only in New Zealand. Launching first in New Zealand has become a common practice for testing new apps and features on the Web — companies use the country as a test market because it has a small population and English is the primary language.

During the public preview launch in September, Mozilla said it would expand to “a few more” countries ahead of a full public launch “later this year.” It looks like the company skipped the second step and just went straight to a broad release. 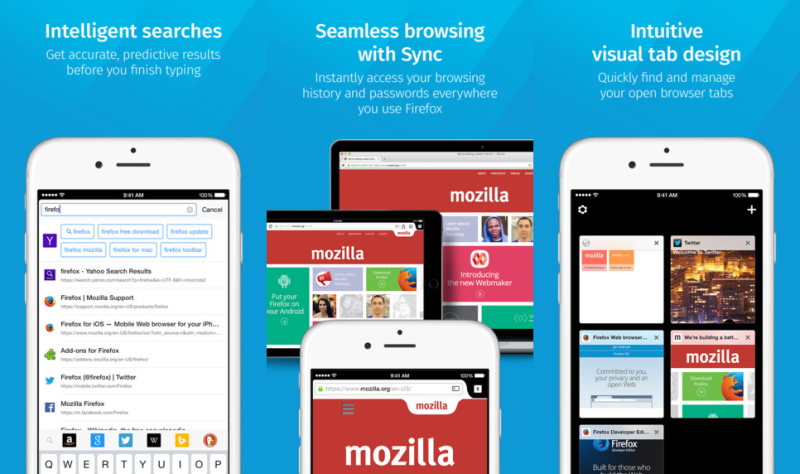 A few highlights from Firefox for iOS : Intelligent Search provides suggested search results and the choice of search providers, Visual Tabs lets you manage multiple browser tabs on the same screen, and Firefox Accounts lets you export your Firefox browser history, bookmarks, passwords, and tabs from desktop and Android to your iOS device. Last but not least, Private Browsing gives you the ability to browse the Web without saving history or sharing existing cookies with the sites you visit.

Mozilla naturally recommends adding Firefox to the dock on the bottom of your home screen for easy access. The company says that while this is “the first ever release of Firefox for iOS,” users can expect to see “much more from us soon as we are going full speed ahead on continuously delivering new features.

”This is a big milestone for Mozilla. In 2013, the company refused to bring its browser to iOS, putting the blame on Apple for not letting browser makers use their own rendering engine.

Mozilla has since decided that its stubbornness isn’t worth the loss in potential users (Firefox for Android passed 100 million downloads in four years). While Firefox for iOS may not be powered by the company’s Gecko rendering engine, it still includes features that Firefox users have come to expect, and that’s what the company plans to push to anyone interested.