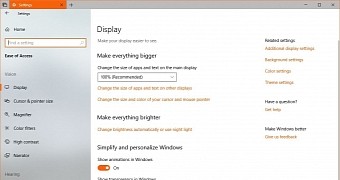 Windows 10 Redstone 4 is just around the corner, as the new OS version is projected to be finalized this month, and Microsoft took a moment to introduce the new accessibility features that will ship as part of this update.

Furthermore, the software giant also provided an early glimpse into what’s to come beyond RS4, most likely in the Redstone 5 update due in the fall.

Redstone 4 comes with keyboard shortcuts for Ease of Access features, and the Settings app can be navigated with Landmarks and Headings through the Narrator, which itself is being substantially revamped.

For instance, it includes performance and reliability refinements, better navigation, and audio goodies like emphasizing text formatting such as bold, italics, and all caps. Narrator now includes phonetic spelling to differentiate similar letters like “b” and “p” and supports different audio output channels.

“More to come in Redstone 5”

With the release of Redstone 4, Narrator also lands in the Safe Mode of Windows 10 and brings braille devices right on the logon screen.

There’s much more to come in this regard on Windows 10, and the company says that it’s working to bring text suggestions for hardware keyboards, as well as more features to Learning Tools in Edge.

One particular area of focus is UI Automation, and Microsoft says it’s collaborating with partners to improve accessibility in Windows 10, with several third-party assistive technologies to be available from the Microsoft Store, including TextHelp’s Read&Write and Equatio and NV Access’ NVDA and VFO’s JAWS support.