Microsoft’s Antivirus Is Just as Good as Avast and AVG, New Tests Show 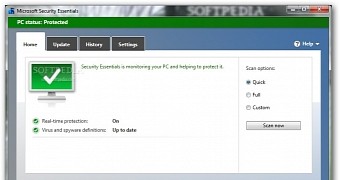 As we’ve told you earlier today, researchers at AV-TEST performed a new series of tests to determine the best antivirus for Windows 7 and, unsurprisingly, Bitdefender and Kaspersky topped the charts once again.

But what’s also worth mentioning is that Microsoft’s antivirus product (called Security Essentials in Windows 7) provided substantially improved performance as compared to previous tests when it was described as the baseline of antivirus software.

This time, Microsoft is part of a group of antivirus vendors that received 16.5 points in the latest tests, getting the same score as more widely-adopted applications like AVG, Avast, and Avira.

Specifically, MSE got 5.5 points for protection, 5 points for performance, and 6 points for usability, which brings it closer to the upper part of the charts rather than to the lower where it was often placed in the past.

The research was conducted in January and February and detailed stats show that MSE offered 100 percent protection again 0-day malware attacks, inclusive of web and email threats, a little better than the industry average of 99 percent.

On the other hand, detection of widespread and prevalent malware discovered in the last 4 weeks wasn’t so consistent in the two months, but still better than the industry average of 99 percent, reaching 99.3 and 99.6 percent, respectively.

When it comes to the performance impact on your system, MSE slows down a standard PC by approximately 12 percent during browsing, while the footprint on high-end PC drops to 7 percent. The biggest impact is recorded in the case of app installation, with standard PCs being 51 percent slower, while high-end PCs reached a 74 percent performance decrease.

For usability, MSE provided impressive results, offering almost flawless results with just one exception: the app incorrectly marked 3 samples out of the 1.3 million used in the case of false detection of legitimate software as malware during a system scan tests.

All in all, it’s very clear that Microsoft has invested a lot in its security software and these tests are living proof that the company is on the right path with its antivirus product. It remains to be seen, however, how many people actually agree to give up on their third-party software and stick with the built-in protection offered by Microsoft.